Nestled in the heart of Arizona, Gila County is a gateway to northeastern Arizona, providing access to I-40 and abundant recreational opportunities in the Mogollon Rim and the White Mountains. Payson is located midway between Phoenix (90 miles to the south) and Flagstaff (92 miles to the northwest), while Globe is convenient to both Phoenix (87 miles to the west) and Tuscon (108 miles to the south).

Within 90 minutes from both Globe and Payson is Phoenix’s Sky Harbor Airport. With 3 terminals and 116 gates, Sky Harbor is the 11th-busiest airport in the United States, serving nearly 44 million passengers per year. Eight cargo airlines and 21 passenger airlines fly out of Sky Harbor.

In 2006 the Arizona Eastern Railway, in cooperation with the Globe Main Street Program and the Apache Gold Casino Resort, commenced operating the Copper Spike excursion rail service between downtown Globe and the casino. Service was discontinued in 2011 after the railway came under the ownership of Genesee & Wyoming. Today, G&W ships agricultural products, chemicals and copper on the rail line originally chartered as the Gila Valley, Globe & Northern, extending 133 route-miles from Miami through Globe to Bowie (AZ) and Lordsburg (NM). 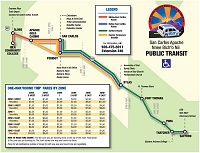